As a woman with two aunts who are breast cancer survivors, I like all the pink in October to bring awareness about breast cancer and funding for medical research.

Of course, I would prefer to celebrate a cure for cancer.  Until that happens, I appreciate the annual pink reminders for women to take care of their health and get the proper screenings.

Despite all the pink we see in October, we don’t always hear as much as I would like as far as awareness.  Today I’m trying to do my part to spread breast cancer awareness. Did you know that breast cancer is the most common cancer in women worldwide?  Statistics from the American Cancer Society tell us that one in eight women (12%) in the United States will develop invasive breast cancer in her lifetime.

Some factors the affect breast cancer risk cannot be changed, such as family history and age.  However, there are things women can do to help reduce their risk factors.  According to the American Cancer Society, five ways to reduce the risk of breast cancer include:

Do you like all the special pink products in October for breast cancer awareness month?

I like seeing them as a reminders for women to care for their health as a show of support for women who have battled breast cancer.  Best of all, these pink products raise needed research funds.

Estee Lauder has been a leading advocate for breast cancer awareness for years.  Evelyn  Lauder was co-creator of the Pink Ribbon and founder of the Breast Cancer Research Foundation (BCRF).

Estee Lauder began the Breast Cancer Awareness (BCA) Campaign and has joined together 15 brands to raise funds for the BCRF with Pink Ribbon products.  You can find the products on the BCA Campaign website.

Do you have any favorite products that go pink for breast cancer awareness in October?

After finding sweet relief from headaches by taking a magnesium citrate supplement, I have become a firm believer in the benefits of dietary supplements.  So when my doctor recommended adding an omega-3 supplement I was happy to comply.

In my case, my doctor recommended the omega-3 supplement since my triglyceride levels were a bit high, which I guess I can blame on my love of sweets.  To help lower those triglyceride levels and reduce my risk for heart disease, she wanted me to take a daily omega-3 supplement.  She said I could take fish oil or flaxseed oil, whichever I preferred.

I was most familiar with fish oil and knew that it has a lot of potential health benefits, so I tried that first.  I just bought the first bottle I found on the shelf at the store.  I think I got through two days of fish oil supplements.  It was not pleasant.  I could not get rid of the fishy aftertaste.  Yuck!

I quickly switched to a flaxseed oil supplement, which I found much more palatable.  I also decided to reduce my consumption of sweets and ramp up my exercise level a bit higher.  After six months, I had follow-up lab work, and my triglycerides were back in the normal range.  Yay!  I was happy with the results and called this supplement another success, like my magnesium supplement.

Later I finally decided to do some research about the type of supplement I was taking.  Turns out, my flaxseed oil supplement does not provide the full range of benefits from omega-3.

According to WebMD, there are three types of omega-3 fatty acids:  EPA and DHA (which are primarily found in certain fish) and ALA (from plant sources like nuts and seeds).

Then I had an opportunity to try a complementary sample of Nature’s Science VEGAN OMEGA-3™ supplement via BrandBacker.  This supplement contains all three types of omega-3 fatty acids:  DHA, EPA, and AHA.  Putting them all together in one supplement sounds brilliant to me! 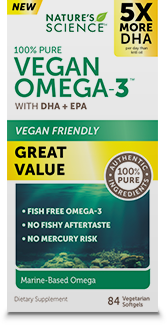 I like the idea of getting the full benefits of omega-3 fatty acids from my supplement.  But I knew I couldn’t deal with the same type of fish oil supplement as I had tried before.  I decided to try this supplement because Nature’s Science promised no fishy aftertaste.

Thankfully, the Nature’s Science Vegan Omega-3 supplement lives up to its description.  I haven’t experienced any bad aftertaste with this supplement.  I guess that’s because it’s actually fish-free.  The DHA and EPA are derived from marine algae rather than fish, making it a vegan-friendly, plant-based omega-3 supplement.

It also contains ALA omega-3 as well as omega-6 and omega-9 from flaxseed oil.

The Vegan Omega-3 supplement has been easy to work into my morning supplement routine.  The softgels are not too large, making them easy to swallow.  The serving size is two softgels.

The only thing I don’t like about this supplement is that you’re supposed to take two servings per day with a meal or snack.  I don’t remember to take the second serving, since I’m in the habit of taking all of my supplements in the morning.  However, I’m getting 565 mg of omega-3 daily with just the one serving that I remember.  That’s actually more than the 540 mg daily of omega-3 from my previous fish oil supplement, so I’m OK with it.

Overall, I’m very happy with the Vegan Omega-3 supplement since I get the benefits of all three types of omega-3 fatty acids in one convenient supplement!

Learn more about Nature’s Science VEGAN OMEGA-3™ on the company’s website at http://www.naturessciencesupplements.com/.

I received a free sample of Nature’s Science VEGAN OMEGA-3 via BrandBacker
to facilitate my honest review.  All opinions are my own.

Since I found a way to alleviate my headaches with an inexpensive magnesium supplement, I’ve been exploring how to incorporate vitamins and minerals into my wellness strategy.  I’ve heard some buzz about vitamin B12, so I wanted to check it out.

WebMD lists many potential uses for B12.  Although the effectiveness is not yet proven for all applications, some of the potential benefits include boosting mood and energy, treating eczema and psoriasis, dealing with high triglyceride levels, and more.  I found few side effects reported for vitamin B12, so I decided to try a vitamin B12 cream.

I received a free bottle of Maxasorb B12 cream from Vita Sciences for review.  I was happy to try this particular vitamin B12 cream because it’s hypoallergenic and uses natural ingredients to assure it’s gentle on skin.  It’s made without parabens, which I try to avoid.  It also has excellent reviews on Amazon.

(Amazon affiliate link) was very pleasant to apply to my skin.  It’s a thick, pink cream with a nice, light scent from the peppermint oil used in the formula.  The scent does not remain long after applying the lotion.  In my experience, it absorbs well without feeling greasy.

Because vitamin B12 cream is billed as a way to sooth dry, itchy skin, I used it on some problem spots that tend to become dry and require regular lotion.  My skin immediately felt moisturized when I applied it.  After a few uses, I noticed those areas of my skin felt better in general, even hours after applying the lotion.

Vitamin B12 is also reported to increase energy.  Although it’s hard to measure that effect, I did feel like I experienced a small energy boost from the lotion.

I’m pleased with my trial of Maxasorb B12 cream.  It’s a very easy and convenient way to get a daily dose of vitamin B12.  I like the benefits I observed while using the vitamin B12 cream, and there are potential additional health benefits.

Vita Sciences notes that vitamin B12 and folate help preserve DNA integrity and are important for lowering levels of homocysteine (an amino acid associated with heart disease). The company also cites medical research that suggests all healthy adults over 50 years of age supplement their diets with 100 to 400 micrograms per day of Vitamin B12.

For more information about Maxasorb B12 cream, see the Vita Sciences web site at http://www.vitasciences.com/MaxasorbB12Cream.

I was provided a free sample of this product via BrandBacker in exchange for my unbiased review.